The club championship registrations report has been updated with recent nominations.  Please take a look at the report to check the events you have been entered in are correct.

Swimmers who have not registered are encouraged to do so at their earliest opportunity.

The results page has been updated with individual PB and event reports which now includes an additional column showing the +/- time difference against a previous result.

Further additions include a current and historic club records reports so swimmers can assess their times against current and previous club members.

The links to the Championship Certificates will become active after the presentation evening.

Mia Bartlett was again the star of the session with a fantastic time of 3:41.57 in the 200m Butterfly which was 23.74 secs faster than her previous best.

The additional session for the 1500m Freestyle event will take on Tuesday 20th May with the mop-up session taking place this Sunday.  Please Note:  Any swimmer taking part in the mop-up session will not qualify for an award but will get recognition of their time on their championship certificate.

Whilst tonight’s championship session didn’t produce any club records it did yield a further 46 PB’s.  This demonstrates the improvement all the swimmers have made during the last year and brings the number of PB’s achieved during the championships to just under 250.

technical problem with the timing system was encountered at the start of heat 2.  After a short delay and the introduction of the traditional stopwatch the event got under way and witnessed a further club record by Carys Lilley with a time of 01:20.07 in the 100m backstroke event.

Following verification of finishing times recorded by the timing system and stopwatches there were no results amended.

For the full results see the results page or the link below.

The 800m championship event took place tonight with club records for both genders.  The female record was initially broken by Tiegan Chipping in heat 2 with a time of 12:08.57 which beat her previous time by 20.01 seconds.  However, in heat 4 Carys Lilley beat her previous time by 37.77 seconds and claimed the club record with a time of 11:55.48.  Steven Upperdine beat his previous club record by 10:25 seconds with a finish time of 11:11.55.

One aspect of tonight’s event was the improvements swimmers made on their previous recorded times.  The most notable were:

Star of the show tonight was Trudi Bartlett who achieved a finish time of 13:24.40 in her first official 800m event.

To view the results click on the link below.

The Championships continued tonight with the 100m Freestyle and 50m Breaststroke events.  As in previous sessions there were an abundance of PB’s and a new club record for Tiegan Chipping in the 100m Freestyle event with a time of 1:14.64.   The system had initially awarded the record to Carys Lilley (01:14.75) but after verification the record has been corrected and awarded to Tiegan.

One of the most notable contests of the evening was between Jack Gregorious and Oli Vercoe with only hundredth of seconds between their finishing times.

A special well done goes to Amy Pike who achieved PB’s in both events even though she had been graded in more competitive heats.

The championships continued in style tonight with 59 PB’s and 2 club records.  Stars of the show tonight were Mia Bartlett and Matthew Bartlettt who had tremendous swims in all three events.

A special mention must go to Callum Bloomfield for showing fantastic support to his sister and all the parents/grandparents who came along to watch tonight.

Swimmers are encouraged to discuss any disqualifications with the Coach when they are next at the pool.

As on Friday there were plenty of PB’s achieved and club records by Jack Gregorius and Carys Lilley.  However, the highlight of the evening went to Hannah Trude, Kerys Gibbs and George Tomkins who all took part and achieved fantastic times in the 400m event.

Well done to all swimmers and we look forward to more PB’s and club records during Friday’s 50m Butterfly, 100m Breaststroke and 200m Backstroke events.

The club championships got under way today with a feast of personal bests and a couple of club records.

Amongst the most notable of the finishing times was the club record of 01:35.23 which Jess Batten-Stevens achieved during the 100m Butterfly which was subsequently beaten by Carys Lilley in the following event with a time of 01:33.00

A special well done must go to the clubs new swimmers of Ellen Bloomfield and Darcie Morton who both achieved fantastic times in the 50m Backstroke.

Click on the link below to view all the results.

Don’t forget the Club Championships continue on Tuesday with normal swimming this Sunday.

There are no upcoming events.

Honiton Swimming Club is the friendly place to swim in East Devon. If you are interested in swimming regularly please do get in touch. If you can swim front crawl, breast-stroke and backstroke with a reasonable amount of confidence, we welcome all abilities and ages. We have swimmers aged 8 to 60+. Many swim competitively, others just to keep fit.

Honiton Swimming · Sunday, December 9th, 2018 at 6:26pm
@HonitonSwimming
Well done to all swimmers at the Exmouth Christmas Cracker! Great swimming from everyone!
View on Twitter
0
5 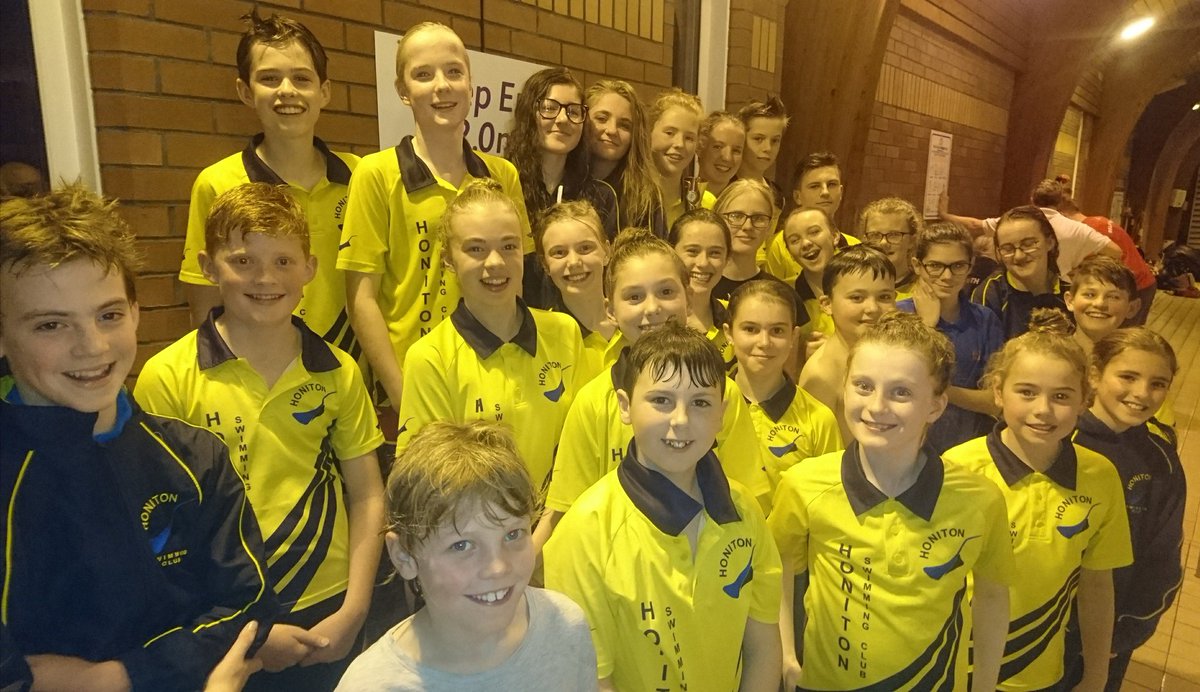 Honiton Swimming · Sunday, November 4th, 2018 at 6:01am
@HonitonSwimming
Good luck to all the swimmers doing day 2 of the Dawlish Firecracker today! Lots of PB's and some medals for Honiton yesterday, good work! #swimming #theweatherisawful
View on Twitter
0
7